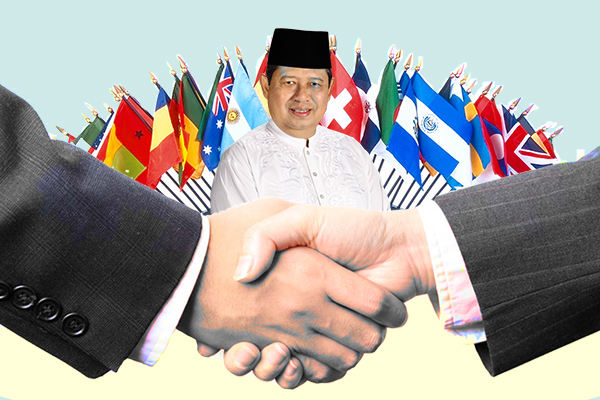 That morning at the end of February 2010, Foreign Minister Marty Natalegawa came to the presidential palace to report to President Susilo Bambang Yudhoyono (SBY) about a request for help from US Secretary of State Hillary Clinton that SBY directly asked Iranian leaders to release three American mountain climbers, previously detained on the accusation of spying and infiltration.

Clinton’s request came as the US acknowledged Indonesia’s close relations with Iran and its leaders, considering that Iranian President Mahmoud Ahmadinejad was warmly welcomed to Jakarta just four years earlier.

The US also has acknowledged Indonesia’s achievement in formal diplomacy efforts as well as our success in informal or back-channeled negotiation in releasing detainees and hostages in a number of incidents leading to that year.

As both of them walked from the presidential office to the State Palace, Marty explained the latest situation to the president, with me, as the cabinet secretary, walking behind them and being able to listen to the conversation.

It seems like the US government had run out of options with it having no diplomatic relations with Iran since 1979, while the US public and the opposition being impatient and angry with the situation, which may potentially damage the Obama administration’s popularity.

Thinking that in the capacity as former D-8 Organization, an Organization of eight developing countries in which Iran and Indonesia are members, I had a good relationship with the Iranian President, Mahmoud Ahmadinejad, later during a breakfast with SBY I proposed that I be sent to Tehran and do the job, which at the same time would be a right thing to do from the Indonesian diplomacy perspective. My thought were simple: since President Ahmadinejad and I had a good rapport, mostly due to my active role as D-8 Secretary-General to promote economic cooperation among its member countries, especially at a time when Iran was alienated from the world’s economy, he might perhaps would be willing to listen and discuss solution. Let alone, I didn’t have the chance to bid him farewell yet after I was assigned as Minister back home and had to leave the Secretary-General position at D-8 which he endorsed me into.

First Lady Ani Yudhoyono joined in the conversation, and voiced her support to help the release of the US citizens, especially because there was a woman among the three detainees. The president just looked at me but said nothing.

That evening when I left and returned to my room, I found two envelops. The first envelop filled with a diplomatic passport under my name, Jakarta-Tehran return airway ticket and some money to cover my modest travelling expenses during the allocated five-days mission in Iran, which left me feeling uncertain since at any rate, 5 days is too short for a negotiation in a tough subject, even with a brotherly country. The second envelop was a letter from the Indonesian president to the Iranian president.

It’s so fast, I thought.

It turned out that the president must have considered it out of humane and humanitarian reason, and then decided to assign me as former D-8 Secretary-General with a re

latively close relationship with Iran as the member countries.

So, on March 1, I flew to Tehran through Kuala Lumpur. I met with Iranian Foreign Minister Manoucher Mottaki for a briefing first before being scheduled to meet with President Ahmadinejad.

Ahmadinejad received me in his office, we talked in private with a translator during which I handed over SBY’s letter. He read the letter, and looked at me in the eye, before saying through his translator, and smiled. “Allow me to ask you some questions.”

“First, as a president of sovereign nation, what will you do if citizens of a foreign nation cross the border and illegally enter your country without any document at all?”

I replied: ”I will detain them.”

“That’s exactly what I am doing. So, I do what I am supposed to do,” he added.

He asked me to visit the Evin Prison where the three Americans were being detained.

“You can check them, and see if they have any bruises at all. And then you can call Clinton now to tell her what you see,” Ahmadinejad told me, pointing at a special presidential telephone near his translator.

“And then you can take them with you,” he surprised me.

My mind was quickly considering my options on how to take the three of them out of Iran, thinking of who owned a jet plane, and could send it right away Tehran.

But then he added: “You see the US has detained a number of Iranian citizens without even valid reasons. If they could do it, then for more valid reasons, why we can’t?”

Now, I understood what he wanted: a prisoner exchange.

I tried keep my mind and gesture intact, deciding not to jump into the offer, and instead told him,”I totally agree with you, and fully believe in you, Mr. President. I don’t need to check them. I will go back, and report it to my president,” I told him.

I flew back to Jakarta, and made a report to the president, and then told US diplomats here, one of them was William Burns, a renown diplomat who specialized in back-channel diplomacy, that the US should release one or two Iranian prisoners, and before Iran release the American detainees.

Not long after that, the US started to free a number of Iranian prisoners, and in return followed by Iranian releasing the three Americans, which was also a decision accelerated through diplomatic efforts from Oman, who bailed out these American hikers for US$465.000 as a fine payment for the violation. I learned this at a later time, that soon after visiting me in Jakarta, William Burns also launched a back-channel diplomacy by engaging the Oman Sultanate, Sultan Qaboos bin Said, to mediate the release the prisoners from both parties.

This was only an example of a resourceful soft diplomacies and intelligence operations under the leadership of SBY. From our role in the release of South Korean hostages release to freeing our journalist from Taliban detention to our role in a number of Indochina conflicts, Indonesia’s roles have been acknowledged by friends and foes globally.

My point is that with enough resourcefulness, we can successfully perform our duties and responsibilities in intelligence and diplomacy, and give our nation a good name globally. This is possible without having to burden the state with high budgets, which could be sometimes difficult to account for, and could even potentially be mis-used if done without proper governance.

Operations under SBY showed that with our networking, guts and brains we can do any operations with low costs successfully.

Dipo Alam is former Indonesia’s cabinet secretary and secretary general of Development 8, an organization comprising of eight Muslim-majority countries which include Indonesia and Iran.

An Oasis for the Stranded, Losers

One Reply to “Successful Intelligence, Soft Diplomacy and Global Role Under SBY”